Newark, New Jersey – – After years of decreasing enrollment and a general lack of trust in its public schools, state data shows that Newark’s public schools have posted their fifth consecutive year of enrollment growth.

According to an analysis by the Newark-based New Jersey Children’s Foundation on data from the New Jersey Department of Education, Newark’s district and charter schools combined to serve nearly 54,000 students in the 2019-20 school year—an increase of over 1,800 students since the prior year, and its fifth consecutive year of increased enrollment citywide. The gains were seen at both the district and charter sectors. 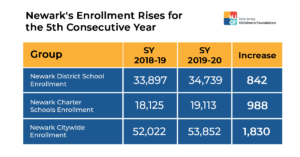 “This data is consistent with what most parents and teachers already know: Newark’s approach to public school improvement is attracting more and more families looking for better options for their children,” said Kyle Rosenkrans, Executive Director of the New Jersey Children’s Foundation.

“Families are embracing our choice-rich school environment where they can choose among many district and charter schools to find the school that is best for their children,” he added. “This is yet another line trending in the right direction for Newark’s schools and as we enter a new school year, it is progress that we can celebrate.”

These positive enrollment trends highlight the series of efforts that first began in 2006, when Cory Booker first took office as Mayor, and continued under current-Mayor Ras Baraka.  During this decade-plus of improvement efforts, the city regained local control of its schools from the state and has an elected board of education responsible for its future, at the same time that it increased the number of high quality charter school options to form what is possibly America’s highest performing urban charter school sector. While the city still faces serious challenges, the positive effects of these changes were most notably captured in a recent national study titled, “Resilience: Will Urban Schools that Beat the Odds Continue to Do So During the COVID-19 Pandemic?”, which showed that Newark leads the nation in creating schools that beat the odds for Black, Hispanic and Low-Income students.

About the New Jersey Children’s Foundation:
The New Jersey Children’s Foundation is a non-profit organization aimed at promoting a fact-based discussion about public education in Newark. Our mission is to invest in people, programs, and partnerships that will improve public education systems by putting the interests of children first. Our vision is that every child will break down the walls of inequity through the creation of high-quality public education systems. Our theory of change is that when communities are armed with accurate information about public education and given the tools to act, cities will demand great schools for every student.